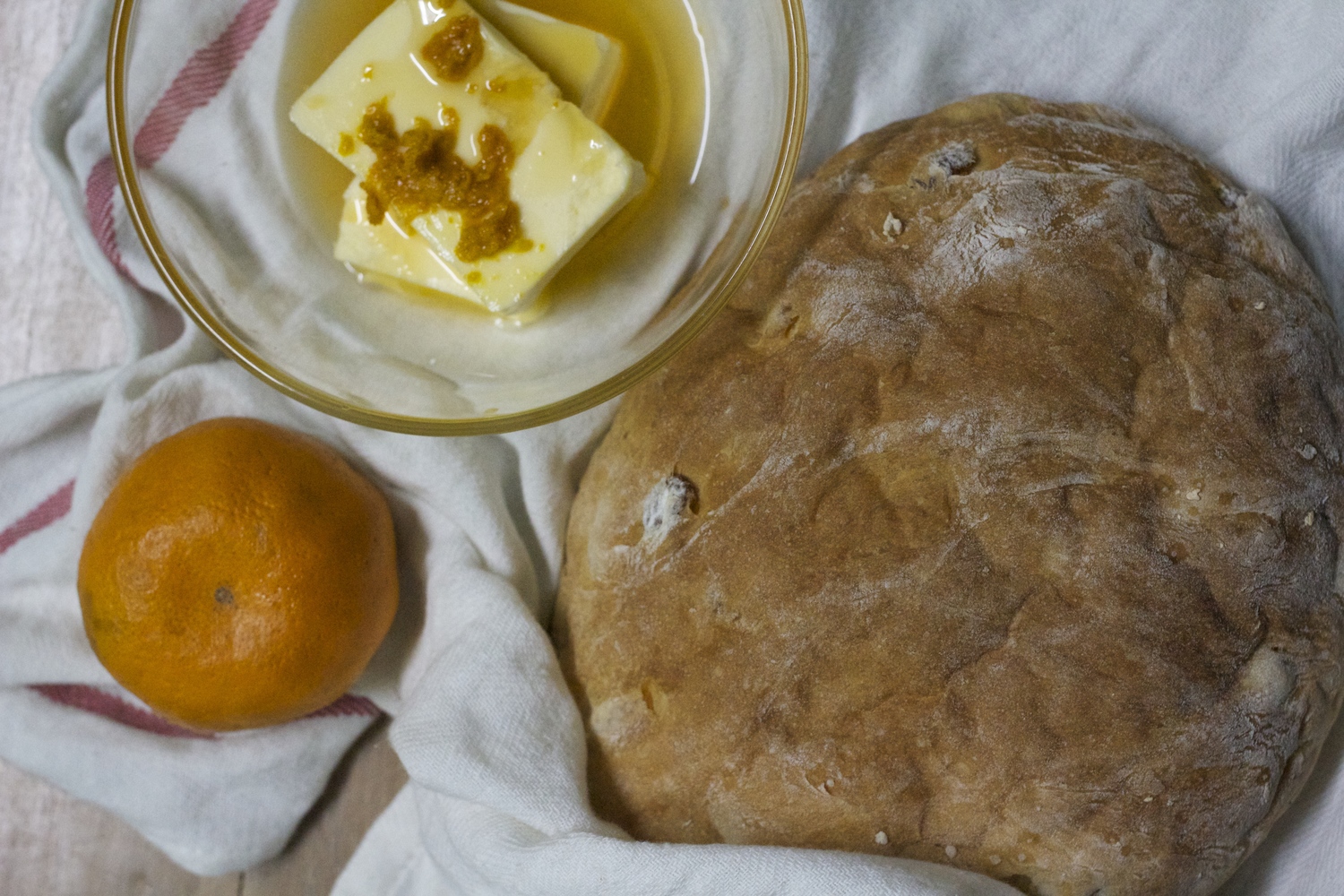 I’m not always a fan of dried fruit in my bread and pastries, but with a good raisin bread recipe, I take exception. I credit my Dutch heritage for my partiality to raisin bread. The Dutch may not be renowned for culinary finesse, but they do know a good bread and cheese; a particular favorite being a slice of raisin bread (or a raisin bun), generously buttered and then topped with a nice piece of gouda cheese (and perhaps some ham as well).

I found myself mixing the ingredients for this bread in the kitchen recently. We were into Day 3 of having houseguests, and I was feeling rather low about my inability to communicate with them (they’re not English speakers). Couple that with the fact that they insisted on doing housework for me (apparently pregnant women aren’t allowed to touch a mop—I won that one in the end, though), and I was feeling rather inhibited and incompetent on multiple levels. My protestations with translated assistance still didn’t win me the pleasure of doing dishes after dinner (an activity I really do enjoy).

This bread became my refuge. No one could take this from me, because I was the only person in the house who knew how to make bread. I have always enjoyed being knowledgable about working with leaven, but in this case, it felt like a superpower. I was able to do this, when nothing else in word or deed seemed to flow. The bread needed no verbal persuasion from me; we two could simply commune at my wooden counter top, speaking the only language needed between a set of hands and a batch of soft, golden dough.

As I started the dough, our local friend, a stranger to the wonders of raisin bread, commented, “that’s a terrible waste of raisins!” I told him he might think differently in a short while. We sliced and ate the bread after dinner, and I’ve never been more pleased to see one person eat a half loaf of my bread in one sitting. I had passed the Skeptic Test with flying colors, and I nearly forgot my lack of verbal prowess for joy of the realization that I still had something pleasant to offer. Dear old raisin bread, you’ve done it again, and I will always be grateful.

(recipe from Robert Farrar Capon’s culinary reflection, The Supper of the Lamb)

2 cups milk (Or part water. If I have nearly sour milk languishing in the fridge, it is perfect for this recipe.)

Scald the milk, then add the butter, salt and sugar. Cool to lukewarm.

While the milk is cooling, combine the yeast, water, and 1 teaspoon of sugar in a small bowl. Stir well. Let stand and expand while the milk cools.

Once the milk has cooled, beat in the egg and the first two cups of flour until well mixed. Pour in the yeast mixture and continue to mix. Then add two more cups of flour and the raisins. Add the remaining 2 or so cups of the flour until a fairly stiff dough has formed. Turn onto a floured board/table and knead for five minutes until glossy. Set the dough aside in a bowl, cover, and let rise until doubled in bulk, which takes less than an hour, usually.

Once doubled, punch down, turn onto a floured surface and divide into two equal parts. Roll each part into a rectangle. Sprinkle with cinnamon, brown sugar and some nutmeg. Roll up, seal edges and place in a buttered loaf pans to rise. Let rise for 15-30 minutes, or until they only partially spring back in response to gentle pressure of two fingers.

For a glossy, golden crust, brush with a beaten egg before baking.

All my measurements for this are approximate; adjust the sweetness or citrusy-ness as you desire.

zest from one orange

or, if you don’t have an orange on hand, 2 tablespoons of frozen orange juice concentrate work perfectly in exchange for the juice and zest

Whip the butter until fluffy. Add honey and orange and whip until well combined. Expect the butter and orange juice to separate a little bit if you don’t use the butter immediately. The honey butter will keep in the fridge for several days.