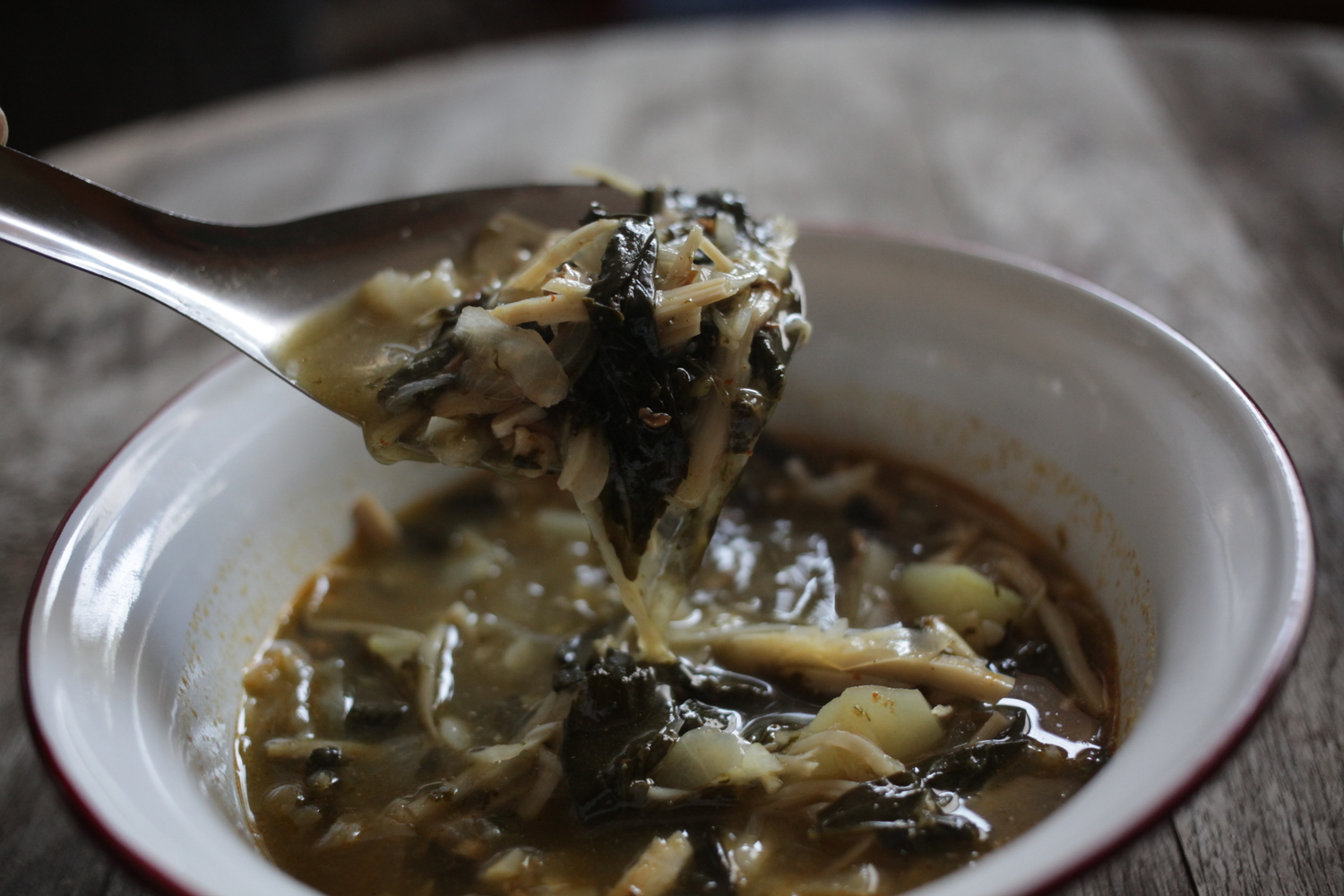 Traditional Burmese sour soup: it is served in most restaurants, alongside platefuls of rice and little dishes with different curries. You can pour spoonfuls of it onto your rice and mix it with a curry, or you can just drink it right out of the bowl. Usually the restaurant staff will keep refilling your bowl of sour soup unless you ask them to stop; I rarely ask them to stop—such is my love for sour soup. (Ironically, you don’t receive bottomless water when you eat out in this part of the world, you have to order a bottle of it. The soup, though? They serve it like western waiters pour water, and it is delicious.) If a sour soup is not served, some other kind of soup takes its place; maybe a light chicken broth or a veggie broth with watercress, sometimes a thin lentil broth. Here is an example of a traditional meal served with a light vegetable broth.

Sour soup is one of the first Burmese dishes I tried to make at home when we first moved here. Wow, did I have some failed attempts. My husband was already conversant in the language when we moved here, but knew nothing about Burmese cooking or cooking vocabulary, so I was on my own. So I tried asking lots of people how they made sour soup and what they added to it. I received such a myriad of responses and had so many dismal, flavorless and watery results, that I gave up for a while. What I only learned recently is that there are a lot of varieties of sour soup, some using different leaves and vegetables than others, hence the confusing responses I received. Thanks to a friend, I now know how to make one of the standard versions of sour soup served here in Myanmar.

This soup has a ton of variations, its sourness being the consistent part. Some women will cook their sour soup with leftover fish and fish bones from a previous meal, some use the bones and fat trimmings from a chicken dish as the base for the soup (it is not uncommon to be picking out small bones as you eat Burmese sour soup). Other cooks might add random vegetables (not hard vegetables such as carrots, potatoes, turnips; the whole idea of sour soup is that it is soft and drinkable, with very tender vegetables), and some versions include only the roselle leaves and very few bamboo shoots. You can adjust this recipe to your liking, but the roselle leaves are the key to the sour flavor; if you like it really sour, use more leaves than the recipe indicates. (I have no idea if or where North American readers can find roselle leaves to try making this soup, but I wish you the best of luck, and I would love to hear about your results!)

Note: I feel it is my due diligence to add a disclaimer before I go on with the recipe. If you do not have an adventurous palate, I would encourage you to pass on this recipe and use your creative energies elsewhere. I personally think sour soup is the most heavenly side dish (especially when paired with a light chicken or pork curry and served with rice), but I know not everyone shares my zeal for sour flavors, and sour Asian flavors are a whole new ball game for some westerners. Sour soup, if you haven’t tried it before, will be unlike anything you have eaten in a western setting, and its flavor is so unique, I can’t really think of any food that is similar–it is not at all comparable to Thai sour soups (if you have experienced Myanmar’s sour soup and have a good comparison, please do share with the rest of us!). So there is your fair warning, do with it what you will, and I wish you culinary success. 1 cup (16 ounce can) of bamboo shoots, shredded and/or chopped small

6 cups of chicken, fish, or vegetable broth (any light broth will do)

1 tsp fish or shrimp paste (if you can’t find any, try substituting a splash of fish sauce)

1 ½ cups wing beans or summer squash, cut into bite-sized pieces (optional; I am told that adding vegetables to the soup can cut down on the sourness, so bear that in mind)

If you have a mortar and pestle and the inclination, feel free to pound the garlic and shallots into a nice pulp. If you don’t have the tools or the inclination, then well chopped onions and garlic will do just fine.

Some Burmese cooks will leave the purple stems on the roselle leaves, however, they are a bit tough and don’t lend themselves to eating the soup gracefully, so I would recommend trimming them off before cooking. Roselle leaves are sometimes a bit large, so if you wish to eat smaller pieces in the final product, chop them up with scissors before starting to cook.

In a large soup pot or Dutch oven, fry the garlic, onion and chili powder for a minute or two. Then add the roselle leaves, bamboo shoots, shrimp/fish paste and powdered shrimp, and continue cooking for several minutes, or until the bamboo shoots are nice and tender (chewy bamboo shoots are not so nice in sour soup, speaking from experience). Keep a close eye on things and stir often so that your leaves and bamboo shoots don’t get scorched. Once the bamboo shoots have softened, now is a good time to add the additional vegetables (if you are cooking this soup with extra veggies). Add the broth and some salt to this mixture and continue cooking until the vegetables are tender.

Once the vegetables are tender and you are pleased with the flavor, you’re done and the soup is ready to serve! If the sour flavor seems too strong, add small amount of water and salt and continue cooking for a few more minutes.