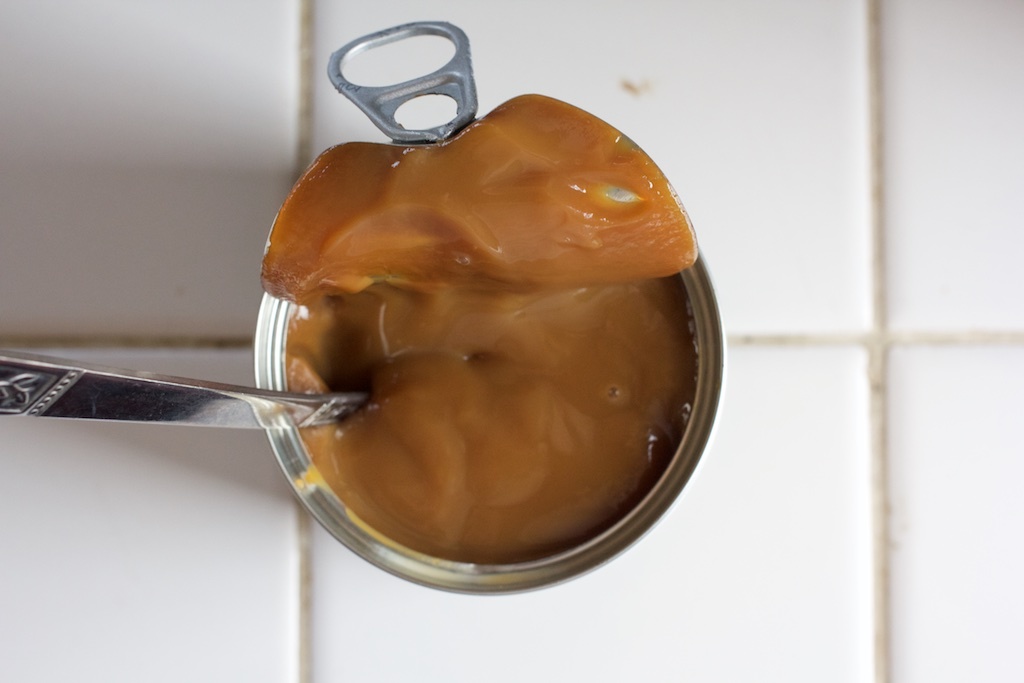 Dulce de leche translates from Spanish to mean, literally, “sweet of milk.” It is creamy, thick, and is, in essence, caramel. Dulce de leche is made with sugar and milk, but can easily be made by heating sweetened condensed milk for a number of hours.

A couple summers ago, when I first made dulce de leche, I submerged a can of sweetened condensed milk in a pan of water, brought it to a simmer, and then continued cooking the can on low (while maintaining the water level) for another 3 hours. After removing the can and letting it cool, I opened it and voila, there was delicious, creamy dulce de leche. (Google “dulce de leche” and most of the recipes that appear prescribe a similar method.) It was wonderful. But I wasn’t keen to do it again soon, as I didn’t really want to leave my stove running for over three hours.

So when I discovered that dulce de leche can be made with a pressure cooker, in 15 minutes, with absolutely no requirement for me to preside over the stove? Let’s just say I have been making it a lot more often now–if you can even call it “making.” This is so simple it probably ought not be called a recipe.

If you have a phobia of pressure cookers, please don’t run away now! This recipe may be a great way for you to cut your teeth on using a pressure cooker (or at least facing your fears!). The pressure cooker is a wonderful thing; I wish I could personally thank its inventor. The pressure cooker has been unjustly vilified at the hands of fearful housewives for too many years, and it deserves a second look. (By the way, explosions with pressure cookers are generally the result of removing the lid when the cooker hasn’t cooled off yet. Haste is the enemy here, not the pressure cooker.)  The pressure cooker saves time, saves fuel/electricity, and saves me a lot of sweat on hot nights at dinnertime. So please, let me introduce you to the wonder of dulce de leche, brought to you by our friend, the Pressure Cooker.

For those who are interested in some more pressure cooker de-villification:

XKCD…Pressure Cooker: What’s the Worst thing that can happen?

Under What Circumstance Would a Pressure Cooker Explode? Place a steamer basket in the bottom of your pressure cooker. (This recipe should not be attempted without the steamer basket, as the sweetened condensed milk will be too close to the heat.) Place one or two cans of sweetened condensed milk in the basket, and then fill the pressure cooker with water until the cans are submerged about 1-2 centimeters. The water in the pressure cooker should just cover the cans, as you can see here. This amount is sufficient for the cooking time.

A word about cans: Other places I have read recommend not using dented cans. Because of where I live, slightly dented cans are more the norm than the exception, and so I have just used them anyway with no ill results. Also, using a can with a pull-off lid is not risky, and it is more convenient. Once your dulce de leche is cooled and ready to be consumed, be sure to store it in the fridge when you aren’t consuming it. I would give you ideas for ways to use dulce de leche, but I’ll bet you don’t need any.